The “American Dream” project we created for IKEA got picked up by the New York Times 😉 Well done Becca, Heather, Yusef, Audrey, and Jen! 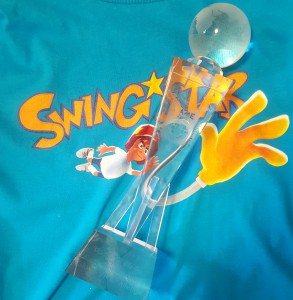 SwingStar VR was selected as a finalist for the 2016 Global VR Challenge, and we were invited to attend the awards ceremony at China Joy Expo in Shanghai, China. Our game beat out 144 global competitors to win honorable mention, and as a bonus we got to explore the strangely familiar streets of Shanghai in unbearably hot and humid weather, and making friends with local VR enthusiasts and the other finalists. Amazing!

We did it – SwingStar is coming out this Thursday, and all we can say is THANK YOU!!!!!

It’s been quite an experience to be a small indie studio and develop a virtual reality game. We are extremely grateful to you all for coming out and playing the game, and for helping us with your feedback and encouragement.

Thank you again for your support, and if you like it, please share the game with your friends.

PS We are putting the finishing touches on the Vive version of SwingStar, available soon. Also, you can play the newest levels (not released yet) at the Playcrafting Summer Expo on May 4 at Microsoft Times Square. We would love to see you! 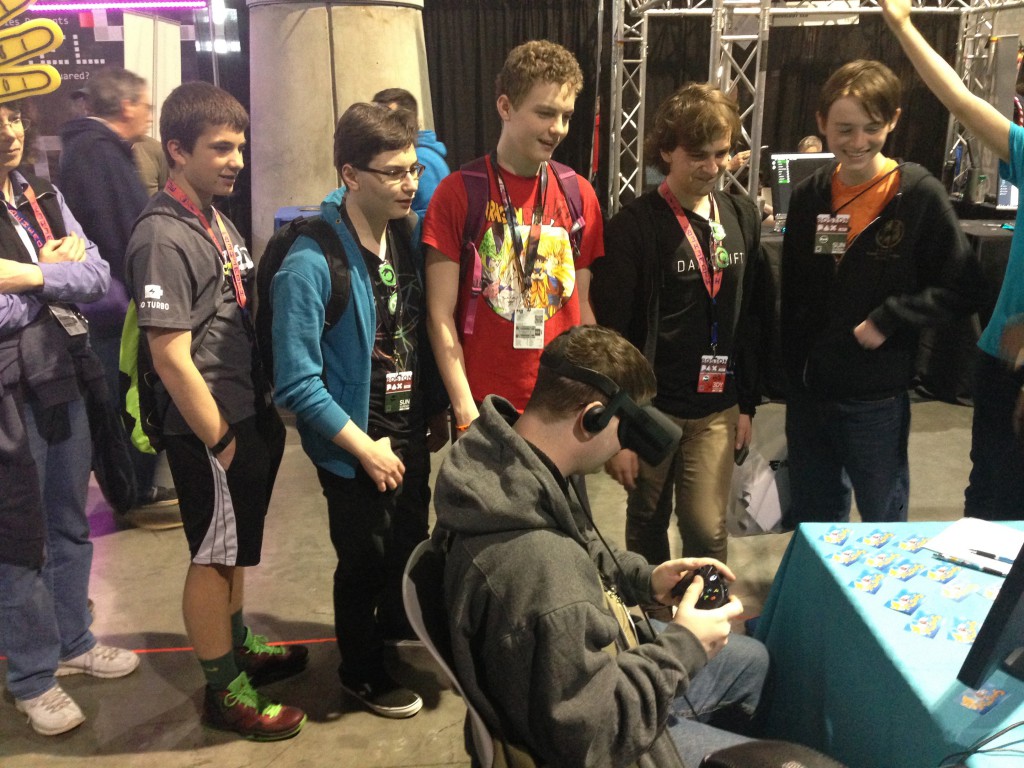 At our small but very popular PAX SwingStar booth we spent three straight days demoing the game on five devices simultaneously, and handing out pins, tattoos and businesscards to over 600 visitors. Day 1 crowds got so large and enthusiastic that the PAX enforcers had to add neon guidelines to the floor, and we struggled to keep wait times short despite capping game play at 8 minutes.

PAX was even more epic than anticipated, and the enormous convention center was filled with exciting cosplay, games, technology and, most of all, amazing people. We were extremely fortunate that we got to be a part of this wonderful, well run event, and hope to see you there next year! 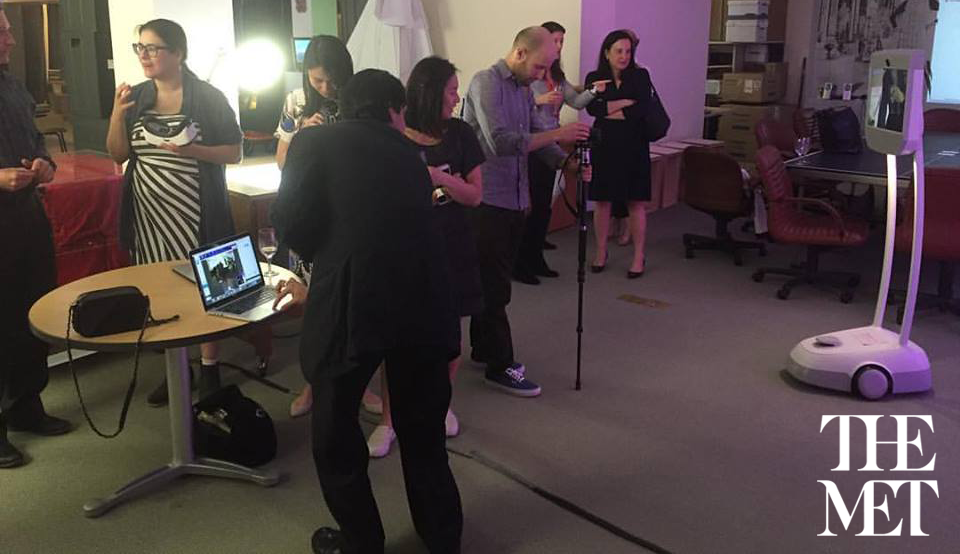 Thank you to everyone who voted for “Sidewalker” at Microsoft tonight! We will take care to spend our prize money on lots and lots of games.

The gorgeous 2011 Studio 1482 calendars have just arrived from the printer, and sandwiched between some unusual drawings by yours truly you can let artwork by my fellow Studio 1482 artists accompany you through 2011! To order, please visit the Studio 1482 website today! 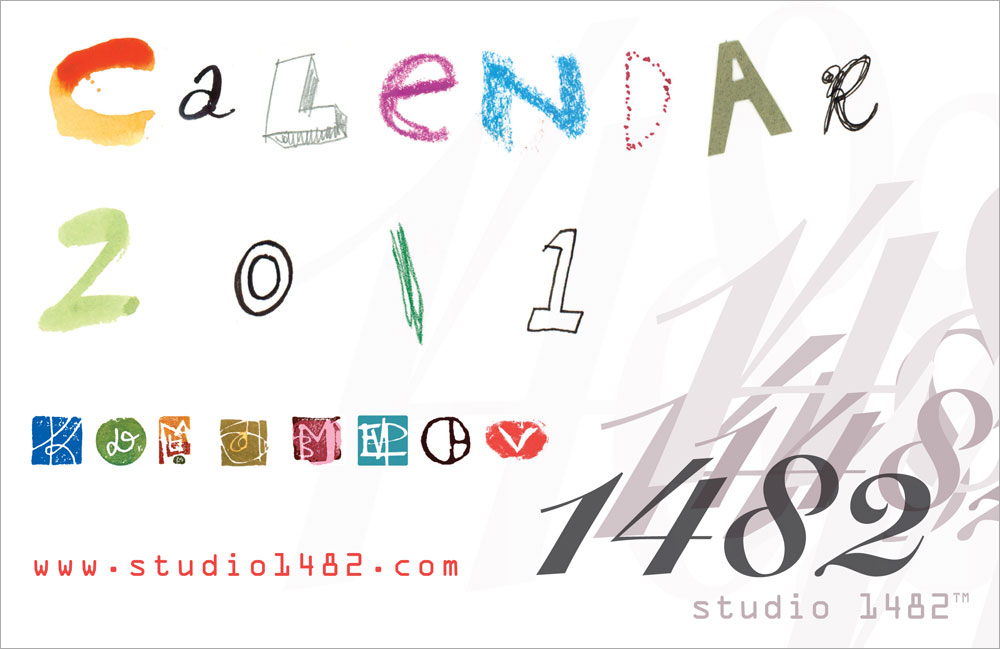 Every day there will be a new EP!PHANY card, so visit the Daily Epiphany whenever you need a little inspiration. For updates on new Ep!phany products and events, or to ask questions and give feedback, please visit our facebook page, we love to hear from you! 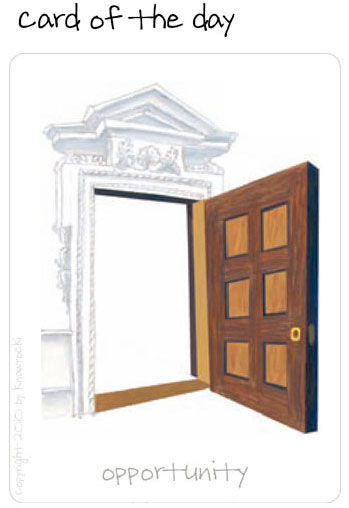 To learn more about the Ep!phany method, please visit our website or email info@theanswersareinside.com for more information on training and how to purchase cards. The answers are inside.

“1791”, named for the year of the Haitian Revolution, which resulted in the abolishment of slavery. This is an ink painting on paper, done with pen and brush. Hand-signed prints of this piece are available for donations of $50 or more to CARE. Please visit our blog Onedrawingaday for more information on how to participate in this fundraiser. All three images in this post were created for a book about a man who was born a slave on an 18th century plantation in Haiti who grew up to become one of the most admired citizens of the new world. (age 7 and up, fully illustrated). For more information on this project please contact me at kati@studio1482.com above: “Haircare for ladies”, below: “George Washington’s inauguration”, both from “The barber of New York” by K. Nawrocki, copyright 2010 by K. Nawrocki Summer is now upon us, and that means the joys of iced coffee, kids shrieking in the spray of fire hydrant fountains, and of course the pied-piper melodies of the ice cream truck. Toward the evening, when the heat comes as much from the pavement as from the sky, the humid air vibrates with reggaeton beats (this latinized jamaican rhythm being the perfect soundtrack for this meltingpottest of cities) until about 3am (or until it rains). Kids loiter downstairs, setting off fire crackers in preparation of the spectacles around july 4th (vertical only if you are lucky and followed, inevitably, by the sound of sirens). Tv is suddenly crappy, the better stuff having been wrapped up for now (in excruciating cliffhangers or luke-warm open ends), promising pleasures on the other side of summer or until the release of the dvd box set.
But Summer is also something else, something I could never have dreamed when I was a little girl growing up in the heart of europe– It is a diamond, a leather sphere, a stick, some plates, and… well, time. Lots of time. Summer time, which flows at a different pace than, say, marathon season or holiday madness. A time that has room for parades and picnics and– Baseball.
Baseball is not a game I grew up with– it was so American (and thus, deliciously foreign). I discovered this game of instant nostalgia once I’d decided to do some research into the soul of America (I also sought to understand American humor–which, it turned out, was a tree with many branches, some of them hanging lower than others). It immediately caught my eye with its old fashioned-looking uniforms (pinstripes and stirrups anyone?) and its leisurely pace, a game as slow as summer. I found the colorful lingo and superstitions infinitely more alluring than any football-confusion of helmets and shoulderpads or tangled mess of legs and nets could ever be.
After learning some history with the help of Ken Burns and watching people play in the park (Bad News Bears style), I felt I was ready to go to my first real game, and decided that if I was gonna go, I might as well do it right, and make it a Subway series game (Yankees @ Mets)… 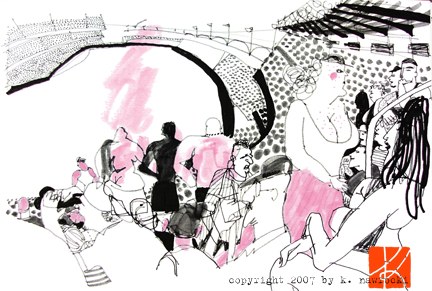 Shea stadium’s sprawling 80ies ugliness disppointed me a little, but I was soon excitely drawing the face-painted mobs; some were torturing effigies of the enemy’s most feared players, banging on cowbells, while others blocked my view with their more comical than menacing drunkesn, sunburned embraces, and for once the ladies’ room was empty, while the line to the men’s room went on forever…
I ate my first hot dog at that game (it was edible but overpriced), and because it was too much fun watching the vendors toss their wares into the crowd, I also had a box of crackerjacks, pretzels, a soda, cotton candy, and a plastic souvenir-cup full of beer. Needless to say I had to recover a little after the game, which ended up being moderately disappointing for someone rooting for the underdog (5:0 yankees).

That weekend, I followed up with a visit to the Bronx, where the Mets were trying (unsuccessfully) to even the score with their cross-town rivals; Yankee stadium with its cake-icing bleachers and steep seating immediately appealed more to me than Shea, and I was torn between bearing reference by drawing and becoming one with the deafening roars erupting around me; in the end, i put away my drawing pad, and joined the crowd, defeated by the sheer momentum of the moment.
Though this was years ago, I still have the plastic mug from the first game, and try to go to a few games every season, though still more for the experience than the actual game. I will sorely miss the old Yankee stadium (Shea, not so much). And if any New York team ever wins the World series again, you will find me at the parade, not drawing, but cheering with the fans!